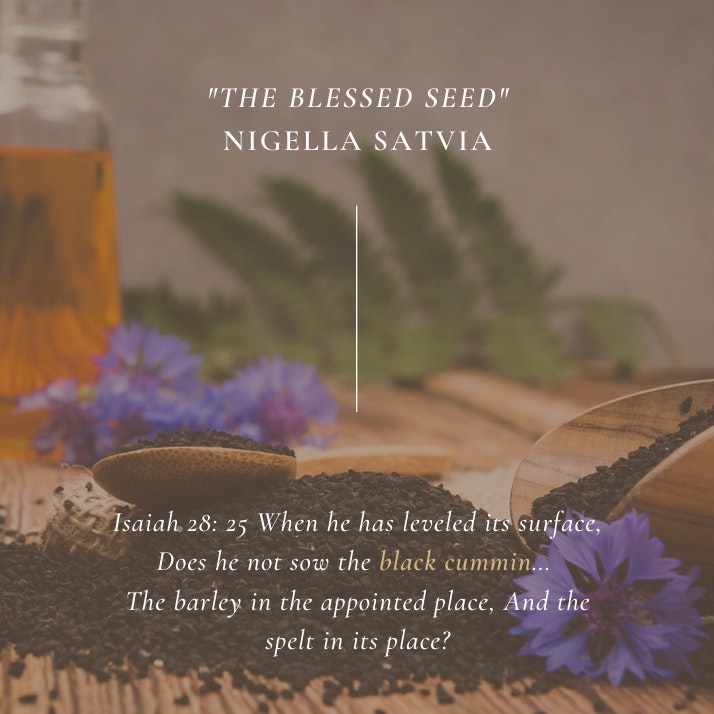 Black seed is also known as The Blessed seed. It is by far my favorite herb for healing. The earliest record of black seed is found in the 8th century written work of the Israelite Prophet Isaiah chapter 28 verses 25 and 27.

Black seed is mentioned as fitches in the KJV and quoted as black cummin in the NLT, NKJV, and CSB. The exact word used in Hebrew is qetsach/ketsah which has been clarified to refer without a doubt to the Nigella Sativa or ‘Melanthion’ seed.

NKJV Isaiah 28: 25 When he has leveled its surface, Does he not sow the black cummin And scatter the cummin, Plant the wheat in rows, The barley in the appointed place, And the spelt in its place? 26 For He instructs him in right judgment, His Elohim teaches him. 27 For the black cummin is not threshed with a threshing sledge..

The black cumin herb goes by many different names. For example, in Arabic, it is termed as ‘Habbah Sawda’ or ‘Habbat el Baraka’ translated as ‘Seeds of blessing’. Muhammad proclaimed that black cummin could cure “anything but death”. While in old Latin it is called ‘Panacea’ meaning ‘cure all’.

This amazing herb can be harvested from the wild but is also often cultivated, especially in east Africa, the former Soviet Union, and in the subtropical belt extending from Morocco to northern India and Bangladesh. Medicinal Black cumin seeds are used in the treatment of a wide range of conditions, including

It's an antibacterial, antifungal, antiviral and antiparasitic. And the list goes on...

This seed and its oil have numerous benefits to the body inside and out. I honestly cannot list them all here. (check the sources at the end of the post for more info)

The seeds have also been used as diuretics, anti-hypertensive (blood pressure), muscle relaxants, and as immunity enhancers in immune-compromised people. Importantly, the seeds have been reported to be safe when used orally in moderate amounts in food (DerMarderosian. et al, 2005).

Examples of other black seed oil health benefits include:

I instructed my mother to take 1 teaspoon twice a day with honey before or after a meal, and she was able to stop taking her precription "medication".

When my father, mother  youngest  brother, and myself had covid we took black seed oil and honey with other  holistic remedies to treat mucus in the lungs, congestion, cough and boost immunity.

For centuries it's been used to treat rashes, psoriasis, and skin/scalp inflammation. Packed with over 100 active chemical compounds that may increase health. These include vitamins and minerals such as vitamins A, B,  C and amino acids. Black Seed Oil helps to reduce acne scars. The anti-inflammatory properties of the oil reduce the appearance of spots and acne by vastly reducing the redness and scarring caused by skin inflammations. Skin softening: Black seed oil has been added to oils and moisturizers to improve skin moisture and hydration. While also killing bacteria and protecting your skin from the stress of the environment.

"..hair is a direct extension of your blood circulation. Therefore, increasing blood circulation directly benefits the health of your scalp and hair," Dr. Skotnicki notes that some clinical studies have shown that various mixtures of black seed oil effectively promote hair growth and decrease hair shedding.

Issues such as dandruff and conditions such as eczema and psoriasis are often treated with black seed oil allowing your hair to flourish. The extracts of black seed oil can help decrease the growth of various fungal organisms" due to its anti-bacterial, anti-inflammatory, and anti-fungal properties.

Articles All About Black Seed