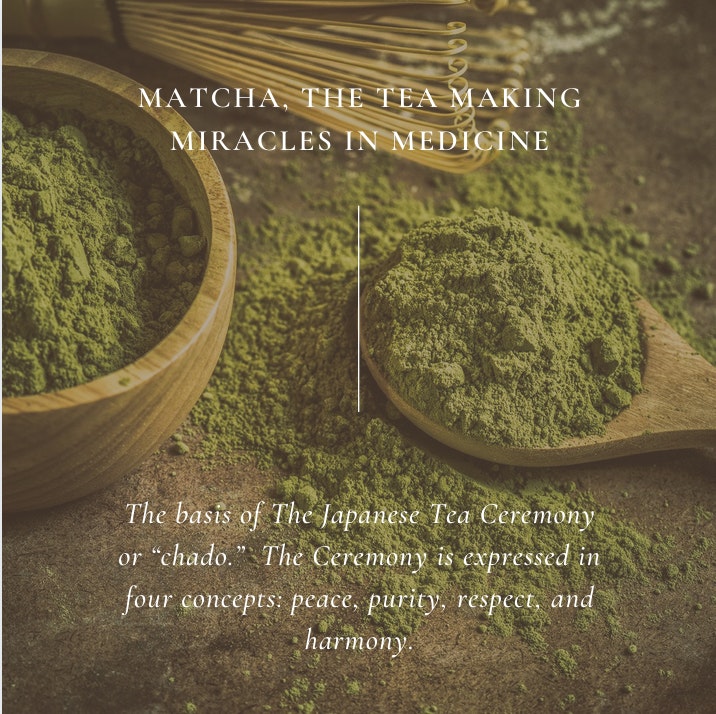 The history of matcha begins in China in the 8th century. This method of making powdered tea became popular in the 12th century. The Tang Dynasty in China steamed tea leaves to form into bricks, making their tea harvests easier to transport and subsequently trade. These tea bricks were prepared by roasting and pulverizing the leaves then mixing the resulting tea powder with water. Matcha tea (Camellia sinensis) was brought to Japan by Buddhist monk Myoan Eisai where it became the basis for their sophisticated art of Japanese Tea Ceremony or “chado.”

The Ceremony is expressed in four concepts: peace, purity, respect, and harmony.

Esai experienced an improved state of calm and alertness when drinking matcha. (Today we know this is thanks to the interaction of matcha’s caffeine and L-theanine).

Matcha for focus, matcha is higher in caffeine than most teas. Packing about the same amount of caffeine as one cup of coffee. The high levels of L-theanine in matcha reduce stress and help produce a state of ease and clarity. Together, the caffeine and L-theanine present in matcha work to improve cognitive function and focus. This makes matcha the best choice of boosting brainpower, studying, or just getting you going in the morning.

Weight Management Tip: A study featured in the American Journal of Clinical Nutrition found that consuming matcha tea can increase the rate in which the body burns calories by 4!! That’s 4 times, from the normal 8%-10%, to between 35% and 43% of daily energy expenditure.

Due to the antioxidant, antiviral and anti-inflammatory function, matcha stimulates and increases the immune system along with the detoxification process in your body. Drinking and consumption of green tea are associated with a reduced risk of circulatory system illnesses and cancers. The antiviral effects of matcha green tea may support the prevention and regulate the immune response in infectious diseases, yes including COVID-19.

Detoxing: Matcha has the ability to safely purge the body of harmful elements. Matcha is five times higher in chlorophyll than regular green tea. Chlorophyll is a powerful detoxifier, helping to eliminate chemicals and heavy metals from the body.

A daily matcha regimen provides potent cancer-fighting properties and can help restore and preserve the body’s integral well-being and balance. Thus helping you achieve a healthier body and mind.

Matcha is a natural nootropic (enhance memory) it also makes the brain healthier by acting as a vasodilator and natural supplement for brain health that increases energy and oxygen flow to the brain.

In Alzheimer's disease, the green tea catechin polyphenols have been reported to have neuroprotective effects (serving to protect nerve cells against damage, degeneration, or impairment of function.) such as anti-oxidative stress, anti-inflammation, and anti-apoptosis.

Matcha green tea intake could reduce brain inflammation. Brain inflammation is considered to play an important role in dementia, and several inflammatory markers seem to be associated with an increased risk of all-cause dementia.

Moreover, green tea catechins have positive effects on heart and blood vessels, and overall vascular function. These effects can prevent stroke, the main cause of Vascular Dementia.

Adding matcha to your diet benefits your hair and skin from the inside out. A cup of matcha can also deliver vitamin C, selenium, chromium, zinc, and magnesium into your body, skin, and hair. Applying topically can calm some skin issues like acne, redness, puffiness, and stressed-out skin.

When used topically, the caffeine in green tea can energize the skin and promote skin firmness over time.

Whichever way you add matcha to your life you are sure to reap the benefits and love it!

Articles All About Matcha